Putting up the Yarn Bomb

Well, after 5 years since the last time the CGOA (that’s the “Crochet Guild of America”) was in NH, they have returned and we were so excited to set up the yarny decorations that would greet everyone as they arrived at the hotel for the upcoming Chain Link conference.

I had a great crew of helpers to install all the pieces – we put some around trees, benches, flower pots and flag poles outside. One even made it on to a garbage can.

The hotel has been newly renovated providing many perfect spots for crocheted projects so we added squares to the chairs in the cafe/restaurant. **A special thank you to Carol M. and Kim R. on the hotel staff who approved our project and supported our efforts!**

Then we headed upstairs and added some crochet finesse to the stair railings, couches and bathrooms . . .

If you have visited this blog before, you know that I love to crochet mandalas. Well, I had a great time creating all of the mandalas we incorporated into the Yarn Bomb decorations. I think there were about 20 in all -here are some of my favorites:

A big thank you goes out to all of my helpers – those who helped carry, hang and crochet pieces – it was a terrific team effort and everyone LOVED the decorations – yay!

Thank you for stopping by – 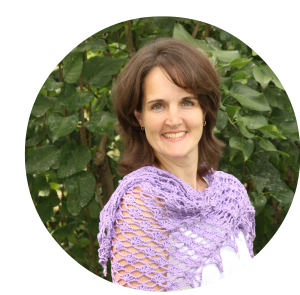 Hi! I'm Jennifer - Welcome to my blog where I share a variety of patterns, ideas and inspirations. I love to combine Celtic Knots with crochet but look around and you'll find much more! Thank you for stopping by.

Sign-up here to become a subscriber and get FREE patterns in your inbox!

Here's some of our Celtic Knot projects - click on image to see the patterns!

Click on photos to purchase these patterns in our Etsy shop!

Click on the Category below to see all the posts on that topic!